Skip to content
Hello The Witches!!!
From Left to Right:
Hannah Ridley – Hannah has been in BATS for a number of years and this is the second time she has played a witch, the first being ‘Glinda’ in The Wizard of Oz. She has also appeared in other BATS productions such as Much Ado about Nothing as ‘Hero’ and the cabaret show Bats on Broadway. Hannah runs Out of Ideas Theatre Company with her sister and recently appeared as the grumpy ‘SGT Sugar’ in the award winning, original play The Cat Burglar.
Natasha Leftwich – Tash has been a member of BATS since the age of about 12. Keen to follow her Dad who was one of the original members of the group.
She has enjoyed many roles from principal girl in several panto’s, to Nana the dog in Peter Pan, to Barbara Windsor’s character in Not now darling, wearing not so many clothes.
She moved away for a while and joined some local groups up north, taking part in a number of plays. When Tash moved back she was immediately welcomed back into the BATS family. For her it felt like coming home.
As well as being the treasurer for the group, Tash also likes to get involved with the backstage crew. Either painting set or someone’s face, give her a brush and she’s happy. Tash was also cast as Clairee in Bats recent production of “Steel Magnolias”
Tash seems to have found playing the part of a Witch very natural. Some might say type cast, she says ‘Actress Darling’.
Jessie Fox – is fairly new to BATS having only joined during the early rehearsals for Cinderella last year. She was thrown in to learning choreography, lyrics and lines for the first time in 12 years and made some amazing new friends doing so. She was truly welcomed in to the BATS family and since Cinderella was also part of the crew for Steel Magnolias, Jessie joined the committee in July and is now the youth rep for the group.
Jessie is mummy to two beautiful little people called Noah and Oswin and enjoys singing the Robin Hood songs with them daily.
Jessie had her heart set on playing one of the Sheriff’s witches from day one. She practiced her Welsh accent every day for the audition and feels so lucky to be playing Gladys with three wonderful ladies and friends.
Following from Robin Hood, Jessie is really looking forward to performing in the Waitling Players Murder Mystery in March written by the very talented Melanie Wilcox 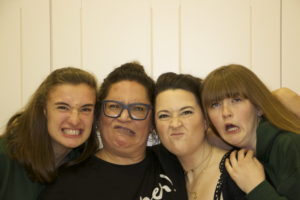 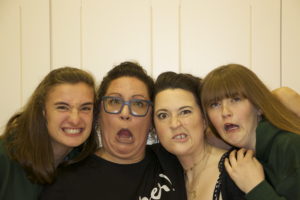 Louise Connolly – Louise is playing Cerys the witch, who is a “learner witch”. There is one problem though – she is very, VERY tall!! Louise is 16 years old and has been a BAT for many years. She started out as a Lost Boy in Peter Pan and then was in the ensemble in Puss In Boots and Jack & The Beanstalk. Louise took on her first principal role as Prince Charming in Cinderella last year end she is always very pleased to be sharing the stage with her mum and little sister. Louise trains at Drama College and has really enjoyed being in Robin Hood and is looking forward to doing many many more shows with BATS